Walking with my dog along Shinkawa river in Tokyo 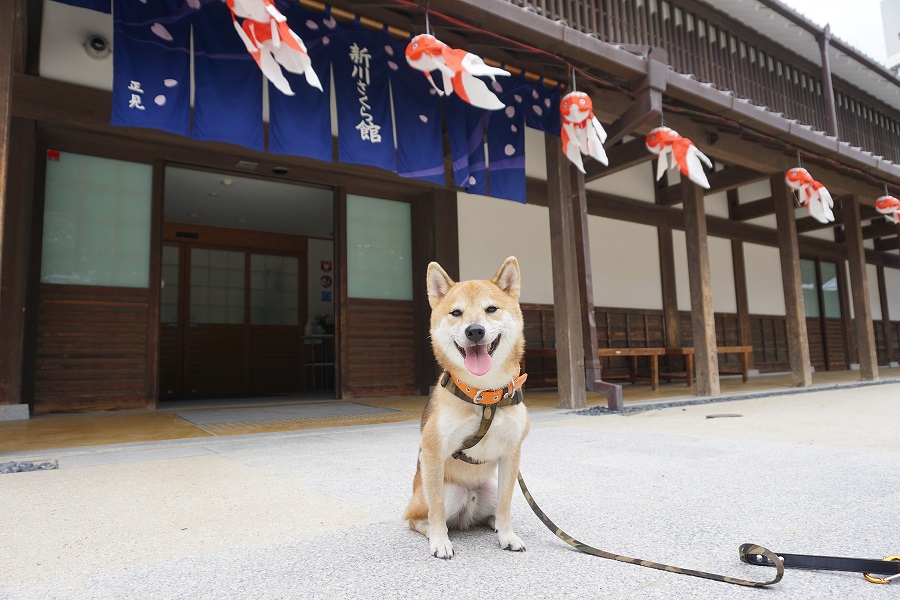 Shinkawa River is an artificial river with a total length of about 3km that connects Nakagawa River and the former Edogawa River.

I go to near the Shinkawa-nishimon Square (The point where the river branches from Nakagawa Rive to Shinkawa River) and start a walk along the river.

When you walk along the bank, the first thing you see is the “fire watchtower” which is 15.5 meters high.
A fire watchtower is a lookout tower that was used for early detection of a fire, calling a fire brigade, and sending an alarm to the town. 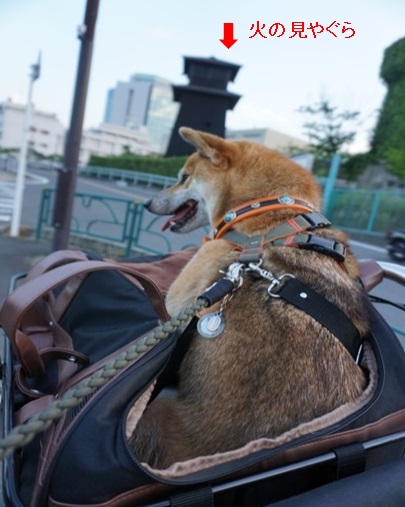 Shinkawa River was used as a waterway to transport various goods to the city of Edo in the Edo period, and shops were lined up along the river.
It is said that it was also called “Salt Road” because it was carrying salt.
In the course of time, transportation means such as trains and cars were established, and ships were no longer operating as they were separated by floodgates. However, now that they are no longer used, they have been maintained to preserve the Edo atmosphere of the town, and as part of the Senbonzakura Project, a monument of the fire watchtower and a magnificent stone wall have been built.

There are 20 kinds of 718 cherry trees planted on the promenade on both sides of the Shinkawa River, and they are used as a waterfront and a promenade for people.
The Shin river Senbonzakura was completed in April 2015 as a new spot for hanami（cherry blossom viewing）.
By the way, you can climb the inside of the fire watchtower, and you can have a panoramic view of Shin river and the town along the coast.
You can see Mt. Fuji in the distance on a clear day.

Admission to the fire tower is free. Open hours are 10 to 3 PM (excluding year-end and New Year holidays) on Saturdays, Sundays and national holidays.
It seems to be open on weekdays during the cherry blossom season. Please note that there may be changes depending on the weather.
Unfortunately, pets can’t get into the fire. 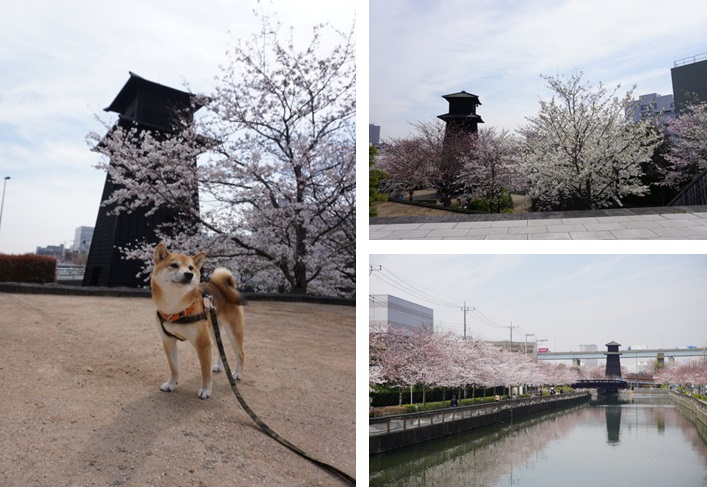 ■A view of Shinkawa River in the cherry blossom season of 2018.

At the Shinkawanishimon Hiroba, where you can see the fire, you can sit on the bank and enjoy the morning sun, or in the evening, you can relax on the square or bank while watching the sunset.
There was also grass so my dog, Gonta was playing happily running up the slope of the bank. 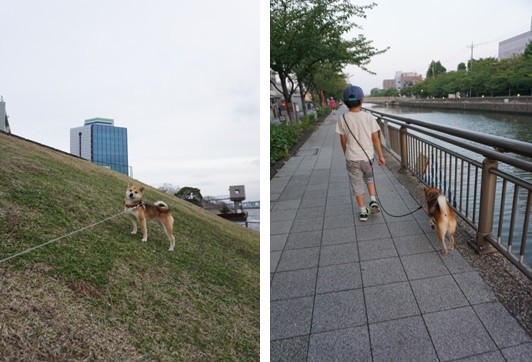 It starts from Shinkawa-nishimon Square with a fire watchtower and goes east along the river.
You can see parents and children of spot-billed ducks in the river, and it makes people who are taking a walk feel relaxed.
There are crabs, so you can see children fishing for crabs depending on the season.
On the promenade, there are many people who enjoy running marathons or walking, and people who walk their dogs.
This time I took a walk with my brothers because it was during summer vacation.
(Note)Bicycles pass on the promenade, so let’s walk carefully before and after walking. 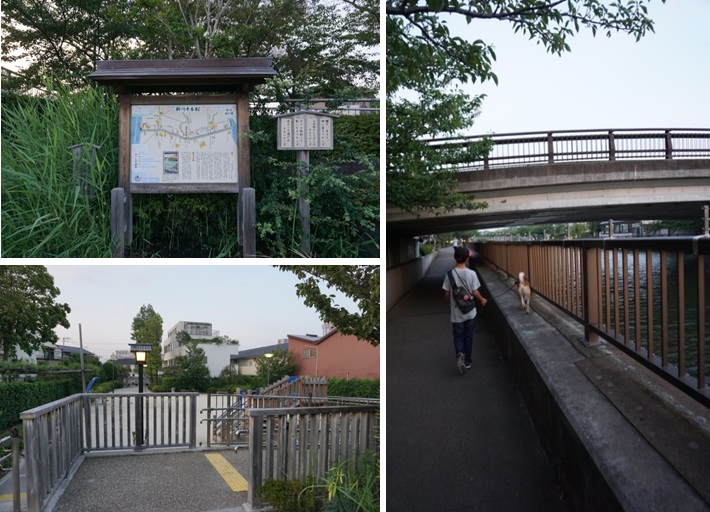 ■There is a park along the way and there are several bridges, so you can take a walk in a relaxed atmosphere without getting bored.

There are nine bridges in total in Shinkawa River. There are seven footbridge and two plaza bridges.
A pedestrian bridge is a bridge built for pedestrians to cross over a river, sea or road.
A plaza bridge seems to be a bridge connected from the plaza.
Each bridge has a different shape and atmosphere, so you can enjoy walking while observing the bridge.

There is “Shinkawa Sakurakan” in near the midpoint of the Shin River . 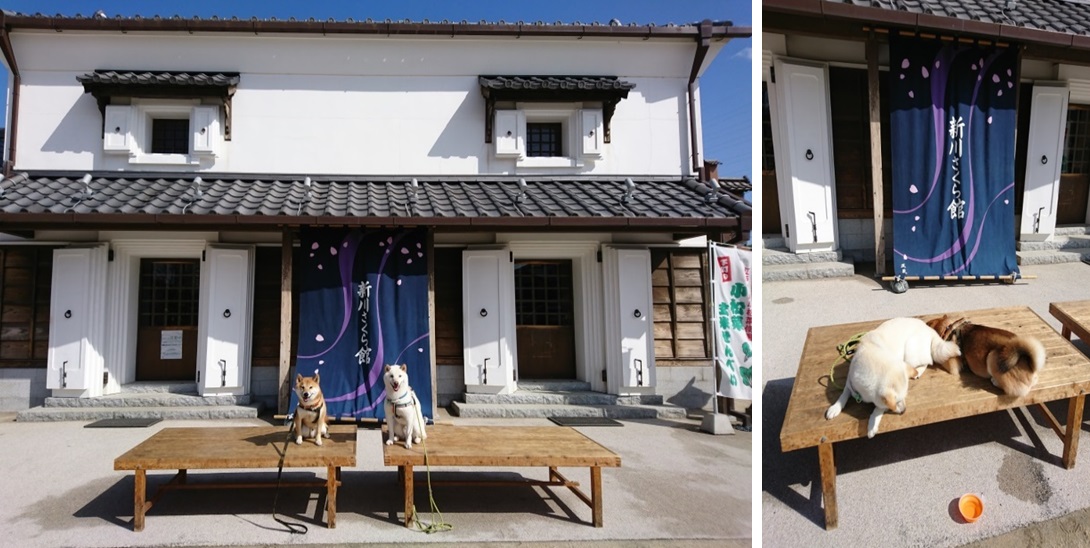 ■In spring, he took a walk with his best friend, Karo-kun Shirashiba. Dogs can also relax like this. He was sleeping comfortably while basking in the sun.

Shinkawa Sakura Museum was built to tell the history of Shinkawa River.
There are rest areas, multipurpose halls and meeting rooms. It is widely used by many people, and events are held every season to promote interaction with the local community.

Light meals such as soft ice cream and drinks are sold at the rest area, and both people and dogs can relax there.
(Pets are not allowed in the building, so dogs can only rest in the bench zone outside.)
There are also cute Japanese goods (Traditional crafts of Edogawa-ku) and sweets made with local komatsuna at the rest area, so it is recommended as a small souvenir.
There are several benches under the eaves at the front entrance of the Sakurakan, so you can stay comfortably in the shade even on hot days.

Gonta often takes a walk with Sakurakan as the turning point.
It’s about a 10 minute walk from the starting point, Shinkawa-nishimon Hiroba.
When it is cool, I go to Shinkawa East Water Gate.
On the way back, I recommend you to walk on the other side of the promenade and see a different view.

■This is the main entrance of Sakurakan. There are eaves, so the shade of the tree will cool down.

On the evening of the day we went for a walk, the Noryo Festival was held, and there were many people enjoying the Bon Festival dance and snacks at the food stalls with beer in hand.
Gonta looked happy to meet a friend of Shiba dog by chance.
A goldfish lantern was displayed near Sakurakan, and many people enjoyed taking a walk in the evening while taking pictures.
There were many foreigners.
The origin of this goldfish lantern is said to be about 150 years ago, at the end of the Edo Period, a merchant in Yanai City, Yamaguchi Prefecture, took a hint from Aomori’s “Nebuta” and shaped a goldfish from Japanese paper and made it using the dye of the traditional fabric “Shima Yanai”.
This goldfish lantern is scheduled to be displayed throughout August.

It’s been extremely hot this year and there are many humid days even in the evening, but the air is clear just by the water, and I felt cool and relaxed.
Not only in summer, you can also enjoy cherry blossoms and seasonal flowers such as azaleas in Shinkawa.
I’m also looking forward to the season when the leaves change from fresh green to red.
I will report the state of Shinkawa in autumn and winter next time. Please look forward to it!!

■I was a little surprised by the sound of the drum, but I was happy to see my friend! 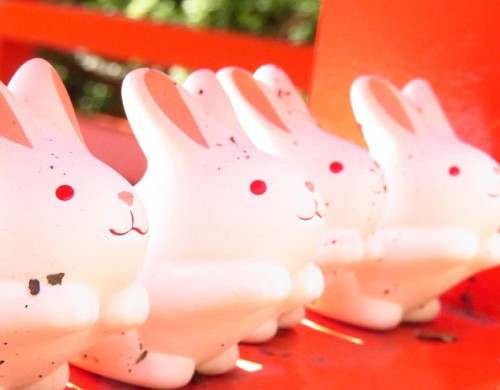 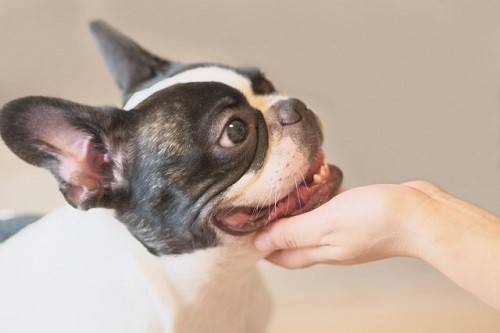 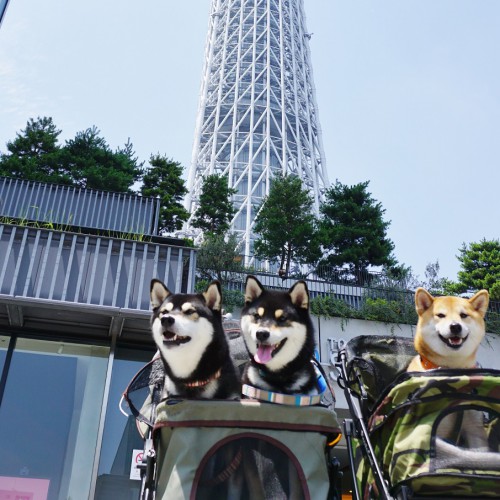 My family’s dog and exploration around Solamachi 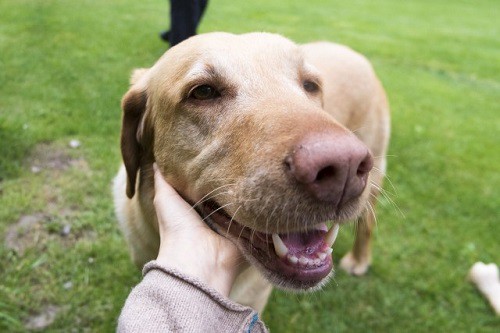